Why it is important to localize applications

Which languages are the most relevant for game/app or website localization?

More and more application and game producers who turn to language localization services ask the same question: “Which languages are the most relevant for game/app or website localization?

Let’s have a look at the statistics provided by App Annie – Top Countries by App Revenues. It features the TOP 10 countries, ranked according their revenue estimations for April, 2015. The data is based on several indicators: company reports, transaction data and consumer research. According to the table below, the main countries with the highest game application sales are USA, Japan, China, South Korea,  UK, Germany, Australia, France, Canada and Taiwan. 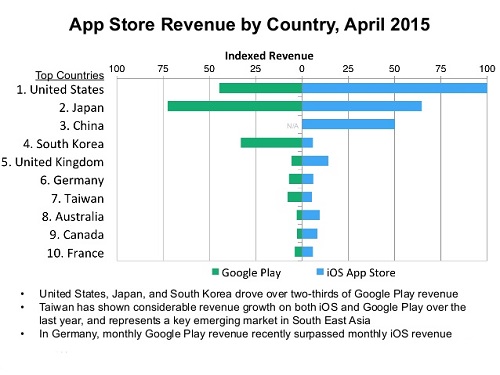 By answering the question: “Where are the biggest sales volumes of mobile applications?”, we can answer another question: “Into which languages is it most important to translate your project first?”.

So, if your application or website is in American English, think of other languages for software localization:

Japanese – The country has a population/Internet population ratio close to 1, meaning that almost the entire Japanese population uses the Internet, and as such can easily download new applications or games.

Korean – Korea has one of the highest levels of game sales on Google Play. Even more than the USA!

Chinese – The fastest growing and most promising app market today. It sold more than 18 billion dollars last year. This year, China is expected to overtake the USA.

British English– The game app sales results in the UK are almost the same as in Germany.

German – Even Germany doesn’t show the kind of figures that Korea does, but it still remains in the 5th place among other countries (except USA). According to statistics, in Germany monthly Google Play revenue surpassed iOS revenue in April, 2015.

French and Canadian – Sales levels in these 2 countries show the importance of the French language for game localization. iOS applications were more popular than Google Play ones.

Taiwanese – Taiwan has shown an incredible increase in rates on both markets – for iOS and Google Play. It is considered to be a key emerging market in South East Asia.

And don’t forget about two other popular languages for localization – Spanish and Italian. Although App Annie statistics don’t include these countries in the TOP 10, game revenue statistics by NewZoo do.  Their statistics shows game revenues in different countries, so the information can also be helpful for game localization. 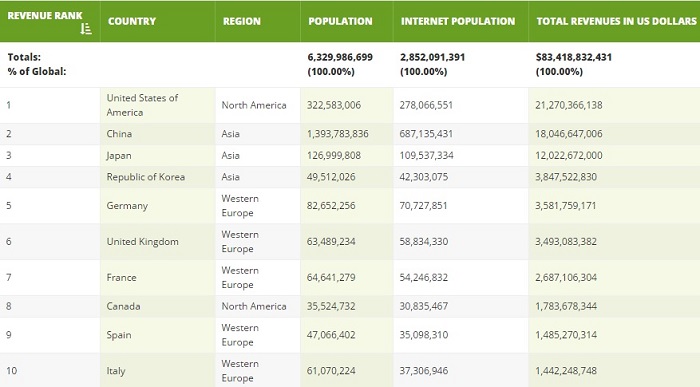 Spain – Although app sales revenue in Spain is not so high as in France or Germany, remember that the Spanish language is the native language for many people around the world.

TOP 10 languages (except American English) that you should consider when planning app localization are:

And don’t forget about the other most promising languages – Portuguese (Brazil) and Russian.